So after a difficult and challenging week or so ….. I ( the wife ) have decided to write today’s blog. The other alternative was another Mark rant,and no one wants that again do they ???
You may well gather that I am sometimes brutally honest, so if that doesn’t appeal to you, then please do not read on !

My mum, my sister, my daughter, and myself all have one very obvious thing in common. No it's not our height, or our preferred flavour of crisps. The one common feature ( well 2 actually ) in the ladies of our maternal family side is that we are all quite blessed in the booby department!

Count Your Blessings
This is a blessing for sure, but also a real difficulty when buying clothing (different size at the top than bottom). There’s also the age-old issues of people - men, usually- talking to our chest rather than our faces, and having to take a loan out every time we need a new bra!
I am pretty sure that some of you readers can identify with these problems ( apparently the average bra size in the U.K. is 36DD) 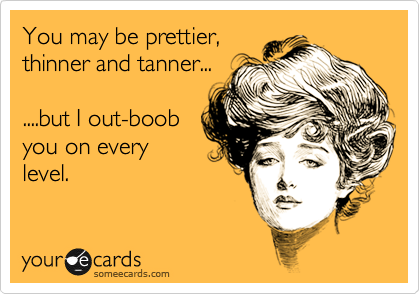 So last week, after many a-month pondering and procrastinating - I went to the doctors with my boobies. It was the left one in particular that was causing concern - I had an area that looked like a lump and felt like a lump - therefore it probably was a lump. It had been there for a few months, but I just thought I had a spot, or had caught it, or had picked it (so unlike me to pick at spots etc - mmmm). Last week, things changed and it started to really ache and unfortunately it was making me a little more 'moany’ and dramatic than I usually am. It was decided by my nearest and dearest that I needed more than gentle persuasion to get it looked at, so like all good and sensible ladies, I trundled off to see a doctor.

Self-Diagnosis
As the massive overthinker that I am, I walked into the surgery, having already planned what treatment I would have, what I would tell my family and how I would survive - because I had convinced myself that the worse case scenario would happen, and the lump would in fact be breast cancer!

I really don't think I am alone in this thought process though, many of us when faced with a difficult situation cope with it by imagining the worst and hoping for the best.

This theory was tested when the doctor examined me, and stated that I had several swollen lymph nodes under my arm, and some blockages in my milk ducts ( as well as the lump - which he didn't actually seem too concerned about ). He mentioned referring me to the breast clinic on the 2 week cancer pathway - and that just obviously confirmed my suspicions that there actually might be something going on.

Was I strong enough mentally for a cancer diagnosis?, had I passed a cancer gene onto my daughter?, was I going to lose one of my biggest assets?…Questions, questions, presumptions, worries. I was going to be an absolute nightmare until the appointment came through.

Self Appointment
Luckily the appointment came within a week (a fine example of our amazing NHS), and yesterday I found myself at the diagnostic breast clinic at Pinderfields Hospital. I had completed the questionnaire, filled in the symptoms checklist - and I was ready for whatever news would come my way. Actually that last bit is a total lie - I was absolutely bricking myself, and I was alone because only the patient was allowed in the waiting room.

I was told that the staff were fantastic (by a reliable source who had been treated by them quite recently), but I had still convinced myself that nothing positive was going to come out of this appointment.

Very quickly I was taken by a lovely jolly nurse into a room, told to undress my top half and put a gown over myself ready to be examined by the consultant, I think the nurse could see I was a little bit anxious, so she repeated the simple instructions even more simply because I hadn’t a clue how to do anything anymore!.

I was examined, and the nice male consultant marked 2 areas of concern (1 being the actual lump, the other being under my arm ), and I was told to get dressed and wait in a different area for a mammogram and ultrasound of my lymph nodes.

Worry Not
Within 5 minutes, my name was called - and I undressed again so that I could undergo the mammogram. I have to say, being blessed in the booby department does not make this particular process any easier. It was uncomfortable (I don't think I need to go into any detail, but if you've ever trapped a part of your body in a tight space …. Ouch ), but the mammogram was done very efficiently and sensitively. I then waited for probably 10 minutes to be called for an ultrasound, which again was uncomfortable because of pain under my arm, but was again done efficiently and sensitively.

The next step was a chat with the consultant, the radiographer had already said that she could see a small cyst - but she assured me it wasn't deep so wasn't anything to worry about.

Did she actually know that telling me ‘ it's nothing to worry about ‘ would be like telling a dog not to bark or a cat not to meow.

So I sat back in the waiting area outside the consultant room. It was fairly quiet, and my thoughts were very dark to be honest, it didn't help that I could see the acute oncology corridor just around the corner. Would I be treading that corridor soon? ….. What if, what if , what if ???

Before any time had passed at all - the consultant called me in, and even before I sat down, he assured me that all was looking ok, there were no worrying areas of concern. He said that the cyst was small and shallow, and unless it changed or increased in size, he didn't feel the need to remove it. I am a very happily married lady, but in that moment, I really did want to actually kiss another man! I had built myself up so much, worried myself to the point of hardly sleeping, and now I was told by a proper medical doctor that I didn't have cancer and all was good. After thanking him and the nurse profusely, I left the room with leaflets on breast pain, and how to examine your breasts correctly in hand.

Homeward Bound
I walked down to the hospital café to see my husband and my sister. I am sure they could already see by my body language that the news was good, and after a short conversation about me stopping moaning now, and a toilet stop, we were on the way home.

I very quickly began to relax, but I also thought of some of the other ladies that I had met that day in the clinic. I'm pretty sure that not all of their news was as good as mine, that some of them would have had the diagnosis of cancer, and been consulted in those acute oncology rooms.

I can't feel guilty about being lucky, and I'm sure that if the worst case scenario would have happened I would have coped because I have an amazing family and an amazing NHS looking after me, but for the moment, just for now - I am grateful for what I have …….. And that's a feeling I want to cling onto for as long as possible.