A Question Of Sport

Words, borrowed from a certain Jimmy Greaves. Words that have, perhaps. never seemed so apt.

There’s a world cup on, you see. A tournament featuring some of the best teams on the planet in a veritable festival of football. For those that follow the sport (And yes, that would include me) it should be a time of thrills and spills, upsets and spectacles, but this year–well this year it all feels just a little bit different.

The I In Team
I am, for my sins, a fan. My teams are Leeds United (I know, I know), mainly because Leeds is where I am from, and England for pretty much the same reason. Those are my tribal loyalties. My geographically based, emotionally fuelled, blind spots of bias. But, the obsession does not simply end with the teams that I actively support. No, I’ll basically watch just about any match between just about any two teams and given there’s a World Cup on I can do so daily. Given the status of the competition, and a Panini sticker album, even my Lovely lady-wife, Tina (Have your read her guest post? No, it’s HERE. You’re welcome) has watched a bit, although this is partially because of one Christian Pulisic, who’s surname she delights in pronouncing ‘pool-o-sick’. 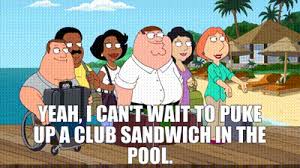 Which leads me to my quandary.

You see, I like to think of myself as an open minded and fair person (Undoubtedly, I’m not, but thinking so pleases me), and I’ve never cared much for -isms.

I think it’s probably because being physically disabled, I am myself part of a minority group. A man who is not a stranger to being ‘othered’ in various ways. I mean I could be talking rubbish, but I think having that level of understanding can, and sometimes does, stretch the empathy muscles. It means that, while I’m neither female nor gay nor an immigrant, I can understand the anger over a major sporting event being held by a country that treats such minorities in such a shocking way.

Strangely, Qatar is reasonably disabled friendly, but if I was a gay man, I would be a criminal and face the possible penalty of being stoned to death. If I was a woman I would be treated as a child under male guardianship. It is a problematic state of affairs to say the very, very, very, very least.

And that leads me to the central question.

Morality And Obligations
I do not wish to support a regime with such laws, practices, and viewpoints. I find them obscene and inhuman but, by the same coin, I would very much like to lend my support to my team, and watch the spectacle of the beautiful game.

Well, the moral thing, you might think, would be to boycott the competition, and for a while I did consider this. However, in practice this would achieve nothing. The rights to host the competition were handed out a long time ago, as were the rights to show the games, and the decisions of teams and players not to pull out. There is no way, at present, for me to affect either decision. I don’t have any kind of Nielsen Box to track my viewing, so my watching or not watching has no effect, either way.

Talking A Good Game
You may think this is moral equivocation on my part, and you might be right. There is a definite argument that I should turn over as a point of principle; that I should treat The World Cup in the same way I treat I’m A Celebrity for aiding in the massaging of the public image of certain former Tory Health Ministers (I’m kidding. I wouldn’t watch that, whoever was on it) but there is another way.

That way, is to use the competition to foster conversation, to encourage debate, and to educate a large group of people, subsets of whom may not have considered such matters. There’s a dialogue to be had here. A public discussion, re-fuelled by FIFA’s terrible decision to stop the captains of certain nations from wearing rainbow armbands (the horror!).

So, in short, there was a lot that could have been done, but for whatever reason (*cough Money *cough) a lot wasn’t, and now, there is little I or any other armchair fan can do except extend that dialogue. You may consider this my extremely humble attempt to do so.

Because there’s absolutely nothing about intolerance or the criminalisation of people.
Until next time.

Posted by life from a seated perspective at 10:24