The Twelve Weeks Of Xmas

Yes, we’re back to something resembling normality, with the bi-weekly blog right back on schedule

It’s about time too really, not just for you lovely people in reader-land to know when to switch off your computers, lest your eyes should fall on this miserable attempt at sense, but also for yours truly to know where he stands (or if we’re brutally honest, sits). Being a non-worker these days anything that smacks of even the slightest amount of regularity helps to stop the days, weeks, and months from merging together quite so seamlessly.

And of course that process isn’t helped when the world at large seems to be a couple of months ahead of me.

And All Through The House
No, there’s no time travel involved, the Doctor and her TARDIS have remained firmly whenever they may be, but whereas I remain firmly planted in mid-October, the people on TV seem to think it's the week before Xmas.

Now, to be fair, this is not exactly a new phenomenon. In fact I’m reasonably sure that I saw Christmas crackers in the supermarket as early as late August (either that, or I’m just going crackers myself). Regardless, even if this very week was the week that was to start, even if I’d not already been subjected to the ordeal of This Morning’s guide to Advent Calendars, it is still entirely too early to be thinking of such things.


The Reasons For The Seasons
And I’m not just being a grinchy, stereotypically shop-at-the-last-minute, male about things either. It really is too early. I mean before we even get close to the big day we've Halloween, and Bonfire Night to deal with, (and that’s just in the U.K.) and although the shops have their share of pumpkins, and fireworks filling the shelves, this doesn’t detract from the tinsel and plum pudding. In fact it only serves to add to the sensory overload as the cacophony of competing colours, sounds, and smells clamour for our attention.

It’s not even as if the festivals in question have the same tone. I mean, yes, they all involve food in one form or another, but that’s about it. Hallow e'en, or All Hallow’s eve is at it’s root a festival commemorating the dead, Bonfire night celebrates the foiling, and burning, of a domestic terrorist. Christmas, depending on your religious views, is either a celebration of the birth of Jesus, the marking of midwinter, or a shop bought excuse to eat far too much of the aforementioned food and pass out during Trivial Pursuits.

On The Second Day Of Xmas
Regardless of options A and B, I will be excising my right to fully indulge in the last of those this Christmas, as is usually the case. The big day itself might be delayed slightly in this particular household as my rather wonderful wifey, Tina is unfortunately working both Xmas, and Boxing day (I have received other offers, don’t worry). The turkey and mince pies will still be on the menu though, it’s just that they will probably be consumed a few days later (and of course, over the next six months or so).

Being a non-believer, the day itself holds no real import for myself outside the social and gastronomic, and the absence of the aforementioned lady, although a sore miss, will no doubt be made up for in an event I’m hoping to call Xmas 2 (Santa’s revenge). Whether we will wait to exchange presents until this time, well that is a matter of some debate. 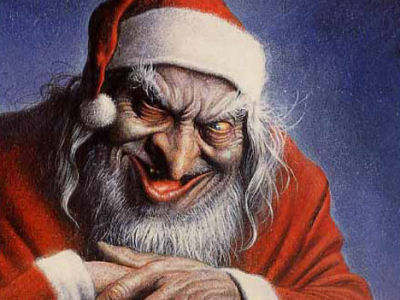 No Time Like It
However, as I’ve mentioned, that is some time in front of us. In fact, as I write, ten whole weeks and two day have to pass before the night before the day after is sprung upon us. In the meantime there is a whole lot of life to live. There’s wood to be burnt, fireworks to ooohh and aaahh at, pumpkins to carve, and a host of trick-or-treaters to pretend we’re out to. There’s Bonfire Toffee, Parkin, and toffee apples to consume, and that’s just for the stand-out days. If we count the countless reasons to celebrate each and every day we live then there’s an almost infinite amount of festivity to enjoy before the panic of realising I only have a week left to complete (start) shopping for thoughtful, considerate, and meaningful presents. In fact thinking about it, there’s Tina’s birthday too, and that’s in just over a week!

Now what was I saying about presents?

Until next time...
Posted by life from a seated perspective at 10:42