The Blog Is Back!

Yes, just when you thought it was safe to peruse your favourite form of social media, I've gone and resurrected the blog.

It's been four long months since I last did this, so do please excuse any rustiness. There are, of course, a couple of reasons why it's been four long months. Good reasons. Valid reasons. As those reasons are going to contribute to today's long awaited post, however I won't go into too much detail until a little later, when we get to the nitty, and, if we're lucky, a little bit of the gritty.

It's All About Me

Now, before we go too much further, I feel I should introduce myself to those lucky enough not to know me.

I'm Mark, a forty-something bloke from West Yorkshire, in the U.K. I was born with a condition called Spina Bifida (See here for details), and am a habitual wheelchair user. Some three years ago  I was given the double-whammy diagnosis of MS. This led to me making the reluctant decision to quit work, and the less reluctant decision to try and write a book.

Apart from that, I'm happily married to an extraordinary woman, have a fantastic step-daughter, who is currently training to be a paramedic, and am surrounded by a downright wonderful collection of family and friends. In short, I'm a lucky, lucky man.

MS, or multiple Sclerosis is a tricky old disease you see. It can lay dormant for long periods of time, before popping up and trying to eat part of your brain. Which part is seemingly random, and depending on the winner of this grey matter lottery, the effects the damage has can also differ from person to person.

Last October the MS decided it would have a nibble on my optic nerve, in a condition called Optic Neuritis.

MS is known for attacking it's victim's eyes, and in my case it was what sent me to the hospital which diagnosed the condition in the first place. Last year's repeat performance attacked my other eye (the right), and it set in motion a course of steroids, a host of specialists appointments, an MRI, and a lot of eye tests. Of course being able to see is what you might call a prerequisite to writing a blog post, and although I still could, I was warned off causing too much stress to my peepers. I also found myself becoming easily fatigued if I even tried to go against doctor's orders.

The Break Down
Thus began a little break from matters of a typographical nature, but only a short one. I would have been back to you long before today, if it wasn't for my laptop breaking.

Yes, timing is everything, and not having a laptop is hell of a lot less. It makes posting an online blog slightly tricky. A little like trying to send a letter without a pen, paper, stamp, or post box. The fact that I bought the machine only 18 months or so ago from a popular high street purveyor of such things (I won't name and shame, but it rhymes with BC Pearled) turned out to not be the boon I was hoping for, as it was only under a year's warranty.

Thankfully, a friendly, and extremely altruistic, independent computer shop owner informed us of the Sale of Goods Act. This lovely piece of legislation states that the products one buys should be 'fit for purpose'. A laptop breaking down after less than a year and could be said to be decidedly unfit. A letter stating this was sent, and after a couple of phone calls, and the paying of a refundable deposit, the laptop eventually came back to us in full working condition. For free! 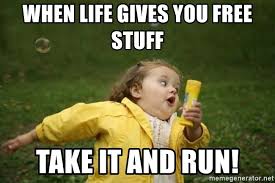 Getting The Needle
So, when we add in Xmas, those are the excuses for my extended leave of absence (what do you mean what about January?). Hopefully it's not something which will repeat itself.

I have a new drug you see. One which is currently coursing through my system, or at least one that will be, when I have my next injection tomorrow night. It's a drug called Brabio, which to my ears sounds like a character from Don Quixote, or possibly a new brand of dog food.

Thus far it's proving to be a lot kinder on my system than the Plegridy I was initially put on. That involved an injection every other week, rather than every other day, but the effects were akin to injecting yourself with the flu virus.

Taking A Stab
Plegridy affected my quality of life so much that I ended up taking the choice to stop it myself.

Brabio, stings on the way in, and... that's about it. If it can manage my MS, and reduce the chances of a relapse by the advertised 'up to' 30% then I'm calling it a definite win. Of course being married, there is of course at least one woman who is more that happy to stab me three times a week with out the cops being called.

So, for now, that's your lot, you lucky people. The next of these poor offerings will be around this time next week, and from there on in I'm going to try and keep to a weekly post, every Sunday evening (GMT). Having made that pledge I will now let you get back to your scheduled browsing and toddle off for some supper.


Posted by life from a seated perspective at 11:11