You know, I think most things have a good and a bad side to them. For every sunny day, there’s a cold, dark night. For every nagging pain, there’s a moment of blessed relief. For every delicious roast dinner, a bowl of sprouts.

Of course, in these days of pandemics and politics the light can sometimes appear to be eclipsed by the shade. It can take something tiny, something trivial, to rescue that contrast, and this week saw just such a triviality raise its tiny head.

Allow me to elucidate.


Take A Chair
As anyone who has the dubious pleasure of following these random musings will know, I am a wheelchair user, This is not some random peccadillo. I’m not using it for sympathy, for laughs, or to get the ladies (yes, Lee Cook, I’m looking at you). No, I need the device in question for the express purpose of getting about. 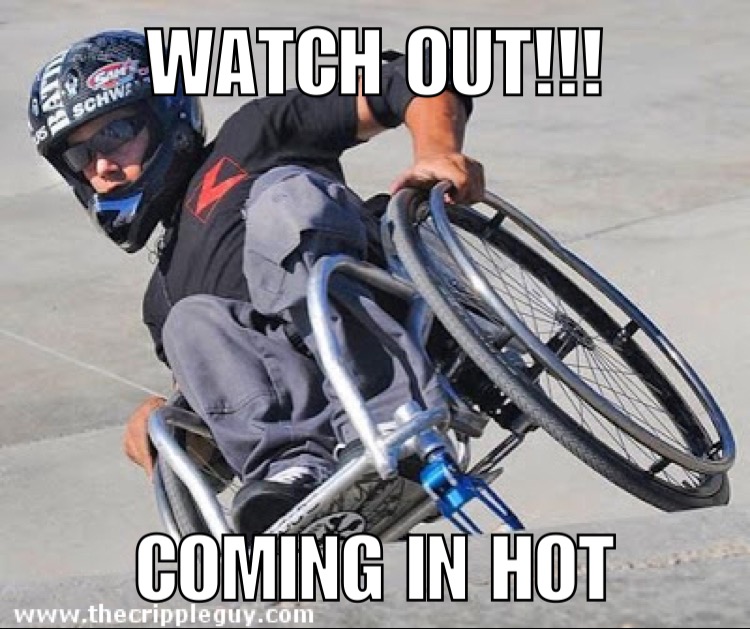 I can walk a few steps, and a few more than that with the aid of elbow crutches, but any distance over a few metres and I need the wheels. Really, the chair is a lifesaver, especially when it’s working.

Now, it’s true to say that my relationship with wheelchairs is both long, and somewhat chequered. Most of the time it’s a happy marriage, man and machine existing in imperfect but functional harmony, but occasionally the wheels fall off (and that’s not an analogy). The last few days has seen a more minor, if still vexing example of the latter.

Talking 'Bout A Revolution
In most wheelchairs there are four wheels, two at the front and two at the back. In previous cases it has been the two at the front, the small ‘castor’ type of wheel (unless you're a Victorian), that have caused the most problems, and it is one of those that has struck again.

If I’m fair, it’s not the chair's fault. This time there have been no major issues with its construction. The wheel is still attached to the chair, which is a real bonus. It hasn’t fallen over. It isn’t pointing sideways and nothing is rattling or making any other strange noises apart from me.

What it’s not been doing, however, is revolving.

Try as I might the right-hand castor was stuck. It would not revolve forward, backwards, sideways, slantways, longways or squareways (strike that. Reverse it). The cause for this seems to be a collection of hair which has wrapped itself around the axle the wheel sits on. Possibly cat hair, possibly dog hair, possibly even human, but definitely a right royal pain in the you-know-what.

So, there I was, stuck. My chair up on bricks, or as good as. It’s almost a good job I had nowhere to go, even if I could. Well, almost nowhere.

Make Do And Mend
I still need to get about in the house, you see, and although a few steps are indeed possible, taking them with a plate of food, or even a cup of tea in hand is akin to throwing the contents to the floor, and quickly running out of crockery. It’s like a tightrope walker being thrown a set of burning torches and a Ming vase to juggle half-way across. Add in the pets and someone or something is getting hurt.

Usually any problems with my wheels mean a phone call to Wheelchair services who will send round a man with a van, a box of tools and a quiet air of competence. If any parts are needed they have a habit of coming a few weeks later, but that’s a different matter.

In this case, as I’m isolating as much as possible, and with a view to flexing my manly manliness, I resolved to sort it out myself. My first solution was to burn the hair. Yes, I know, but it seemed like a good idea at the time. Unfortunately, burnt hair seems to stick to metal, and apart from an awful smell, the experiment produced no notable effect.

I then attacked the blockage with a pair of scissors. This was somewhat more successful, and I ended up freeing enough hair to knit my own yeti. I did not end up with a spinning wheel, however. Having tried these home remedies, the only option left to me was to borrow a spanner from next door, or phone Wheelchair Services. As it was now Friday evening, neither would happen all that quickly.

Free At Last
And then the clouds parted. Four days of annoyance ended, and a surge of positivity I’ve not felt for a while conquered an increasingly grumpy mark. The wheel moved! I don’t know how, although I think a combination of my ‘home remedies’ and a little brute force in the forward momentum department might have resulted in the clogged up hair breaking and coming away. The details don’t really matter, however, because once again I could move. I could turn corners, and head in the direction I wanted to, rather than the one the chair did.

It’s a tiny thing. Inconsequential, really. No lives were at stake. Nobodies health impacted, In the grand scheme of things it was a minor annoyance suffered by one man. An annoyance that was short lived and which is now over. It provides perspective, though. It reminds me that even in these Covid days there will be other, smaller things both to curse and to celebrate. There are still victories to be claimed, no matter how small.

Posted by life from a seated perspective at 13:01